Cassie absolutely loves her “baby” (a blacked-out Dodge Challenger), but is the King of Hearts singer about to switch it up?!

Cassie (who recently rocked out some fierce (!) HEAD-TO-TOE modeling for LOVECAT Magazine), recently Instagramed a pic of a “chromed-out” Audi R8 Spyder (below). So, have Cassie’s Challenger-loving eyes been captured by Audi, or is she just feeling this shiny Audi’s likeness to a mirror?

Either way, the fact that Cassie was intrigued enough to snap a pic is no surprise since the Audi R8 won the coveted 2010 “Most Wanted” award from Edmunds’ InsideLine.com. And that was the SECOND time in two years that Audi snagged the title!

Plus, celebrities like Tyga, Akon, Justin Bieber, Lira, Seal, Soulja Boy, Lady Gaga, T-Pain, and the Kardashians, are all said to believe in the power of the Audi R8 (chrome, or not). Even Audi knows the car is a winner, as this hilarious R8 commercial surely attests.

But, the real question is, which car will Cassie choose?! The plot thickens. What’s your vote? 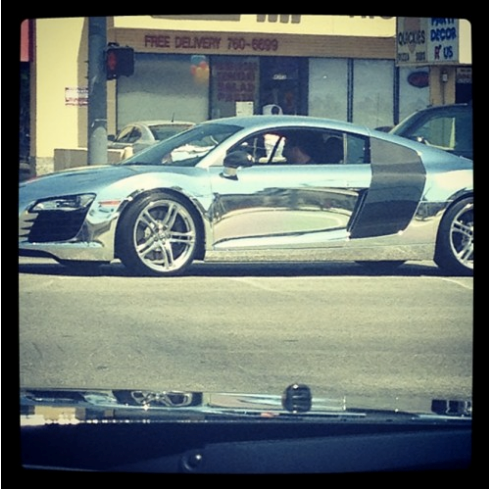 Join the email list to be notified about the Sunday Matinees
Plus exclusive ROCKS BY SEKOU discount codes!